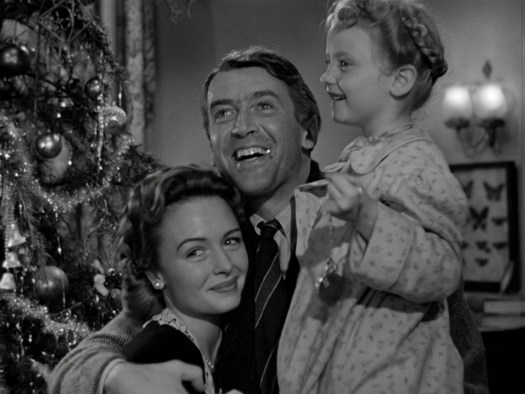 It’s a Wonderful Life: Everything You Didn’t Know About the Furniture from the Classic Holiday Film

The movie It’s a Wonderful Life is a holiday classic, re-watched by millions of people every year. Set in the 1930s and 1940s, it wasn’t actually a box office success during the time of its release. But now, it’s seen as a quintessential holiday film with lessons about the meaning of life and the role of community in lifting one another up.

The film is about George Bailey (Jimmy Stewart), and set in the fictional upstate New York town of Bedford Falls. We follow George as he grows up, falls in love, and has a family of his own. Meanwhile, he struggles to keep his father’s small business up and running. But circumstances lead to George finding himself on a bridge making a suicide attempt on Christmas Eve. However, George’s wish to no longer be alive summons his guardian angel, Clarence, from the heavens! Clarence gives George a glimpse of what the world would look like if he had never been born.

The production design and set dressing for It’s a Wonderful Life is a fantastic feat of world-building. A little known fact is that the special effects team won an award for their noiseless “chemical snow” recipe. At that time in Hollywood, most fake snow was made with cornflakes which crunched. This required that actors dub their lines later on. It’s a Wonderful Life was filmed on a set in California during a heat wave, so they really needed a realistic, quiet snow!

But back to the furniture.

The crux of this film is the relationship between the Bailey family and their community. And we’re about to explain how the furniture deftly illuminates this theme. It’s a Wonderful Life is about the complexity and richness of small town relationships. It’s also about how to make the best of life when times are hard, like during the 1930s and 1940s.

He grew up in the 1920s, and the furniture in his childhood home reflects this era. Or rather, it reflects the Victorian-style design elements that George’s parents probably inherited from their parents. We see two beautiful beaded hanging lamps, one in the living room and one hovering over the Bailey dinner table.

They are most likely made of slag glass, and resemble the popular Tiffany lamps of the time. We don’t see much of the elder Bailey home, but it does feature sensible, solid wood furniture. We get the feeling that their style is definitely a holdover from Victorian “country-style” decor.

Mr. Potter is the nemesis and polar opposite of George Bailey. Potter is a greedy banker, hoarder of wealth, and ignorant of his community. His office is full of ostentatious displays of his money. It includes two busts of Napoleon, one portrait of himself, statuettes, books, and ornate wood furniture. The height and build of Mr. Potter’s desk accommodates his wheelchair. On his desk, you’ll notice two telephones, assorted papers and pens, and an odd-looking contraption that is actually an old-fashioned letter sealer.

But the major design element in Potter’s office, visible in almost every frame with him, is Potter’s ornate office chair. In fact, this style of chair is actually known as a “throne chair.” This is a clever nod by the designers to Potter’s elevated sense of self. This banker’s chair is French-style, 19th century, and probably carved out of oak or walnut. The chair’s high back and ornate design commands attention and intimidates whoever is sitting across from Potter. This is especially visible when George meets with Potter, who offers him a high-paying job in exchange for liquidating his family business.

This is a brilliant example of how It’s a Wonderful Life uses furniture to contrast George Bailey’s humility and Henry Potter’s excess.

Mary’s childhood home is delightfully airy, and features several really evocative pieces of furniture from the time period. The first is her carved wood sofa, or settee, in the living room. This is a Rococo-style piece which became quite popular in the 1920s and 1930s. The lace doilies pinned to the back cushions give it a homey feel, and it sits quite low to the ground.

Take a look at the scene pictured above in It’s a Wonderful Life, where George and Mary are sitting together on the settee. You can see that Jimmy Stewart’s knees actually come up much higher than his waist!

The second major setting in the plot is the telephone area in Mary’s home. At the base of the stairs, we see a marble-top wood table beside a floral armchair. It is here that Mary receives the phone call from Sam Wainwright while George is moping in the living room. This style of marble-top wood end table was a very common piece in homes from this time. And as the 1940s rolled around, florals quickly came back into fashion. We’ll highlight more floral motifs in the new Bailey family home further down (Zuzu’s petals, anyone?).

320 Sycamore is the address of the abandoned, grand old Granville house. This is where George and Mary first throw rocks through the windows and make wishes after the dance.

Later on, the couple chooses to give up their honeymoon savings to keep the Building & Loan business afloat. Mary gathers some accomplices, and surprises George by transforming 320 Sycamore into an impromptu bridal suite. The home is still dirty, drippy, and mostly unfurnished, but Mary sets a beautiful dinner table and lights a fire. She sets up a bed with two pairs of slippers, and turns down the blankets.

It’s a pivotal moment in the film – George shows up miserable, and keeps referring to it as “that drafty old house.” But Mary eventually wins him over with ingenuity and love. They enjoy a staycation honeymoon together in Bedford Falls.

It’s not clear how long the house has been abandoned. We can clearly see some outdated design elements during these honeymoon scenes. Mostly though, Mary has probably scrounged clean furniture from around town. It’s a Wonderful Life is full of moments where a character relies on their community. They also re-use objects around them to solve a problem.

Spoiler alert! 320 Sycamore eventually becomes the new Bailey family home. They work together to clean and update the home, and soon Mary has three children, Janie, Zuzu, and Tommy. George is still in a miserable state trying to preserve the family business and resenting his more successful friends. For him, 320 Sycamore is still a symbol of everything that has gone wrong in his life. When he’s frustrated, he still calls it “that drafty old house”.

The loose filial on the newel post on the Bailey staircase is a plot device in the film. Whenever George climbs the stairs, it pops off in his hand and he hatefully jams it back on. But his perspective changes after Clarence shows George what life would be like if he’d never been born. In a poignant moment, George returns to the family house and races up the stairs to see Mary. As he does, the filial once again pops off into his hand, but this time he grins with joy and kisses it gratefully.

This location serves as the heart of the rest of It’s a Wonderful Life.

It is here that the Bailey family prepares for Christmas eve together. This is where Mary is seen calling the police to look for George when he goes missing. And it’s here that the community comes together to help save the business and celebrate George Bailey.

There are some really cool furnishings here!

First we can spot a lovely 1930s-era radio cabinet over by the Christmas tree. There is an Anthropologie-style butterfly collection mounted above the radio cabinet. The overmantel by the fireplace is a classic feature of homes from earlier years. It has clearly been lovingly restored by the Baileys.

We see a sweet toile-style wallpaper throughout the house. Capra gives us a glimpse of Mary applying the wallpaper atop a ladder in a reno montage.

In the rest of the house, there are several hanging lamps. These resemble slightly updated versions of the ones in the elder Bailey family home. And there are several highly unique carved wooden display cabinets in the lower level of the Bailey home. They also have a piano, on which Janie practices Christmas songs during the tense family confrontation before George leaves.

In Zuzu’s bedroom upstairs, we see flowers almost everywhere. In the scene where she asks George to paste the petals back onto her dying flower, we can see a floral motif throughout. There are flowers on her bed frame, on her bureau, and even on her wallpaper.

The overall theme of the furniture in It’s a Wonderful Life is to make do with what you have. The film takes place during in 1930s and 1940s, as World War Two was dominating the social, cultural, and economic dynamics of the country. Many materials were diverted to the war effort, so people made do with hand me downs from previous generations or DIY projects.

The Bailey family were clearly heroes in this effort. Even though the final scenes takes place in the 1940s, much of the Bailey furniture looks like it’s from the 1930s. Another example of this theme is when George sent his brother to school and stayed behind to run the family business. The Baileys lived small but they were generous, offering up their personal savings to keep the community bank afloat. Mary embodied this theme when she fixed up an old abandoned house for their honeymoon, and eventually it became their permanent home.

The finale takes place on Christmas Eve 1945, after World War Two has officially ended. The Bedford Falls community got news of the Bailey family’s situation with the Building & Loan, and on Christmas Eve they flood their home with well wishers who come bearing cash gifts.

The Gift of Community

The film ends with a bell ringing, and Clarence the angel gets his wings. George reunites with his family, the community saves the business, and George rediscovers the true meaning of life.

Do you like this style of furniture? We foresee a lot of 1940s style elements coming back into style this year, and the DIY trend will simply never grow old! Let us know in the comments if you learned something new.

Furnishr is on a mission to make furnishing easy. We will create bespoke design packages that fit your style, your space and your budget. Just choose a design, and we will set up every product in your home in single day.

Submit a design request to get started.

We work with customers in the USA and Canada. We are proud of every project we furnish.
See Our Work

Your designer will work with you one-on-one to personalize your package.

We’ll do the rest.